Overview: John Perrotta, (known as the Italian Don Rickles), since first taking to the comedy stage in 1991 is the perfect stand up comedian for your mid-sized to larger event. John is well-known for his rapid fire delivery of one liners and his ability to improv off of the crowd is what has made him the go to comic for any kind of event from bachelor parties and reunions to corporate events.

What to Expect: When John takes the stage, be prepared to hang on and not let go as this high energy comic unleashes his brand of insanity on the audience. John doesn’t have a set act. Everything is off the top of his head, which guarantees a unique experience each time John performs. If it’s non stop laughter you’re looking for, hire John Perrotta.

Content Rating: John is able to accommodate all crowds from mild to wild. 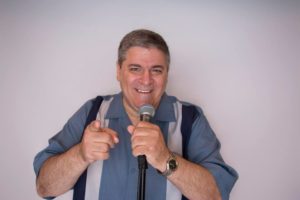 In 2008, John was voted Best Providence Comedian by the readers of the Providence Phoenix and in 2012, John was inducted into the Rhode Island Comedy Hall of Fame for his outstanding contributions to stand up comedy. John is the owner of Cranston’s Comedy Factory and is well-known in Southern New England for providing young comics with their very first shot on a pro stage. John has performed with comedians, Bill Burr, Bob Marley, Tom Cotter, Gilbert Gottfried and has opened for John Cafferty, Eddie Money and Juice Newton, among others. John is also the host of his own comedy showcase at the Comedy Connection, East Providence.